​Miss an Astro Live? Catch up below!

In December, we chatted with an expert on the Orion heat shield from Lockheed Martin. Elysia's pre-show highlighted the events leading up to the historic launch of Artemis I as well as the "Red Crew" who saved the day (with some interesting connections to the Intrepid!)

Check them out by clicking the images, below!
​Fall . 2022
Elysia hosted another Astronomy Night onsite at the Intrepid Museum featuring legendary Apollo 13 astronaut Fred Haise!
​Miss a Virtual Astronomy Live? Catch up below!

June's episode of Virtual Astronomy Live featured some truly out-of-this-world musical guests: NASA Astronauts Chris Hadfield and Cady Coleman! Elysia kicked off the show with an overview of the Voyager Golden Record which is still carrying music through the universe today!

In August, we highlighted the groundbreaking first image returns of the James Webb Space Telescope. Elysia's pre-show highlighted space pareidolia, a phenomenon that makes us see shapes or pictures in seemingly random places such as nebulas or craters.

Check them out by clicking the images, below!
​In March, we kicked off our exciting new partnership with NASASpaceflight by moving Virtual Astronomy Live to a brand new timeslot, during their 3pm NSF Live show! Elysia presented a pre-show exploring the unsung women who paved the way for today’s female astronauts before a discussion with astronauts Dr. Sian Proctor and Nicole Stott.

"'Til the Boys Come Home" - Two women strike up an unexpected friendship in this immersive musical, set on the New York subway amidst the heightened political tensions of 1917. Journey with them through stories and songs of the Great War era as they discover that their bond runs much deeper than they realize.​​
​
​Summer . 2019
This past June, Elysia performed as part of the Revolutionary Warblers at the New York Luncheon, held at the historic Willard Hotel, at the 2019 Daughters of the American Revolution Continental Congress in Washington, D.C. They performed a program called "Songs of the Suffragists," consisting of stories and songs about the music of the woman suffrage movement. They also had the honor of performing a few songs for all Congress attendees at the popular "Service to America Night," introduced by none other than the DAR President General, herself! For more about the Warblers, visit www.RevolutionaryWarblers.com.

In August, Elysia also presented on Elinor Smith: The Flying Flapper of Freeport at the Live Interactive Planetarium Symposium at the Cradle of Aviation Museum in Garden City, NY, as well as at the International Museum Theatre Alliance Annual Conference in Indianapolis, IN on her performance outreach work with the Intrepid Museum's "Crossing the Line" program.
​
March . 2019
The Revolutionary Warblers performed a new show, "Flickering Treasures: Songs of the Movies," at the 2019 DAR Maryland State Conference in Ellicott City, MD, as well as their popular "Songs of the Suffragists" show at the Washington, D.C. DAR State Conference. For more about the Warblers, visit www.RevolutionaryWarblers.com!
​
​September . 2018
Elysia attended and presented at the 2018 International Museum Theatre Alliance's Global Conference in Los Angeles, CA! Her presentation, "A New Train of Thought: Using Technology to Enhance Interactive Storytelling," discussed her work incorporating technology into a museum theatre setting to create more engaging, interactive programming.

​
What mode of transportation do you turn to when a hurricane pelts the city with rain or a blizzard blankets it in snow? Join us for a (surprise!) rap battle between a New York City Bus and Subway to finally answer the age-old question, “WHO IS BETTER PREPARED FOR WILD WEATHER?” Modeled after the hit web series Epic Rap Battles of History, get ready for three rounds of riotous rhymes that are simultaneously hilarious and educational! Who wins? YOU DECIDE!
​
​​She is currently in rehearsals for an "epic" new piece for the New York Transit Museum's summer programming. Stay tuned...
​
5 . 17 . 2016
Elysia recently attended an on-camera workshop at SAG-AFTRA with casting director Kim Moarefi.

Next up, she is currently writing an "epic" new piece for the New York Transit Museum's summer programming! She is also creating a brand new historical character and rehearsing for her surprise performance in D.C. next month. More info to come!
​
3 . 4 . 2016
Elysia has just been cast in an exciting new surprise project this summer with the Daughters of the American Revolution at Constitution Hall in Washington, D.C.!

She will also be performing in another sneak-peek concert of songs from Elevator Heart, an all-female ensemble musical theatre piece that takes place over the course of a single open mic night. "The open mic night to drop all mics."

Monday, October 26th @ 7:30pm
Dixon Place Lounge 161A Chrystie Street, NYC
book & lyrics by Sara Cooper
music by Amy Burgess, Julia Meinwald, and Julianne Wick-Davis
​
8 . 24 . 2015
Elysia just closed a summer-long run of her original show Tunes Under New York at the New York Transit Museum and it was a HUGE hit! When asked what they liked most about their visit, groups overwhelmingly responded with "the show," adding, "it was definitely the highlight of the day!" One group even asked for the song lyrics: "our students were trying to sing them on the train ride home!"

Due to the show's success, the museum might bring it back for public programming during this coming Winter and Spring Breaks. Stay tuned! 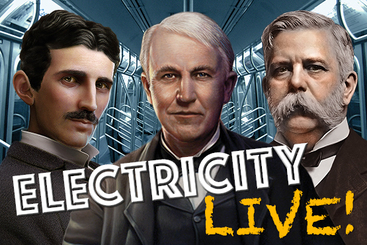 3 . 15 . 2015
Jumpin' Jiggawatts! Elysia will be returning this April in Electricity LIVE! – a new, interactive show  at the New York Transit Museum which she co-wrote and animated.

The show was originally sponsored by Time Warner Cable as part of S.T.E.M. family programming during mid-winter school vacation at the museum.

Discover the secrets of how electric current travels along the third rail to power the NYC subway in this electrifying, learn-out-loud, interactive show. We'll travel through time and meet with some of history's greatest inventors to get the subway (and you) moving!

Spring Break Dates:
April 3, 10 @ 10:30am, 11:30am
April 7-9 @ 10:30am, 11:30am, 12:30pm, 2pm
1 . 13 . 2015
Elysia has been commissioned to help create and star in a new show at the New York Transit Museum all about electricity and how the subway uses it! The show, sponsored by Time Warner Cable, will run February 17-22, coinciding with S.T.E.M. family programming during mid-winter school vacation.
​
8 . 9 . 2014
Elysia is currently starring in the new show Things I Left On Long Island at the New York International Fringe Festival! This beautiful play was written by Sara Cooper (Transport Group's The Memory Show & 2014 recipient of the American Theatre Wing's Jonathan Larson Grant) and is directed by Noah Himmelstein (Andrew Lippa's I Am Harvey Milk) at the Players Loft in Greenwich Village. Visit www.ThingsILeftOnLongIsland.com for more info!

7 . 8 . 2014
Groovy! Elysia has begun performances as "Margaret Stephens," a bubbly aspiring journalist headed to the 1964 World's Fair! She will be performing all summer on board the vintage R-33S subway car at the New York Transit Museum in Brooklyn.

6 . 10 . 2014
Beehives and "Bluebirds" and Beatles, oh my! Elysia has been asked to write a new character for the New York Transit Museum's "World's Fair" themed summer programming.

It promises to be "outta sight"... Stay tuned..
5 . 1 . 2014
Fabulous news! Things I Left On Long Island, a beautiful new play by Sara Cooper (Transport Group's The Memory Show and 2014 recipient of the American Theatre Wing's Jonathan Larson Grant) will be premiering in the New York International Fringe Festival! Elysia has previously workshopped this piece twice (Theater for the New City and Dixon Place) and has been re-cast as the lead, Marny. Dates and more info to come!

When 28-year-old Marny finds a lump in her breast, she moves in with her mother. Pretending she isn't flunking adulthood, she must either succomb to the whims of a family in crisis, or take back her life — and her play.
4 . 15 . 2014
A brand new look for the site! Enjoy!